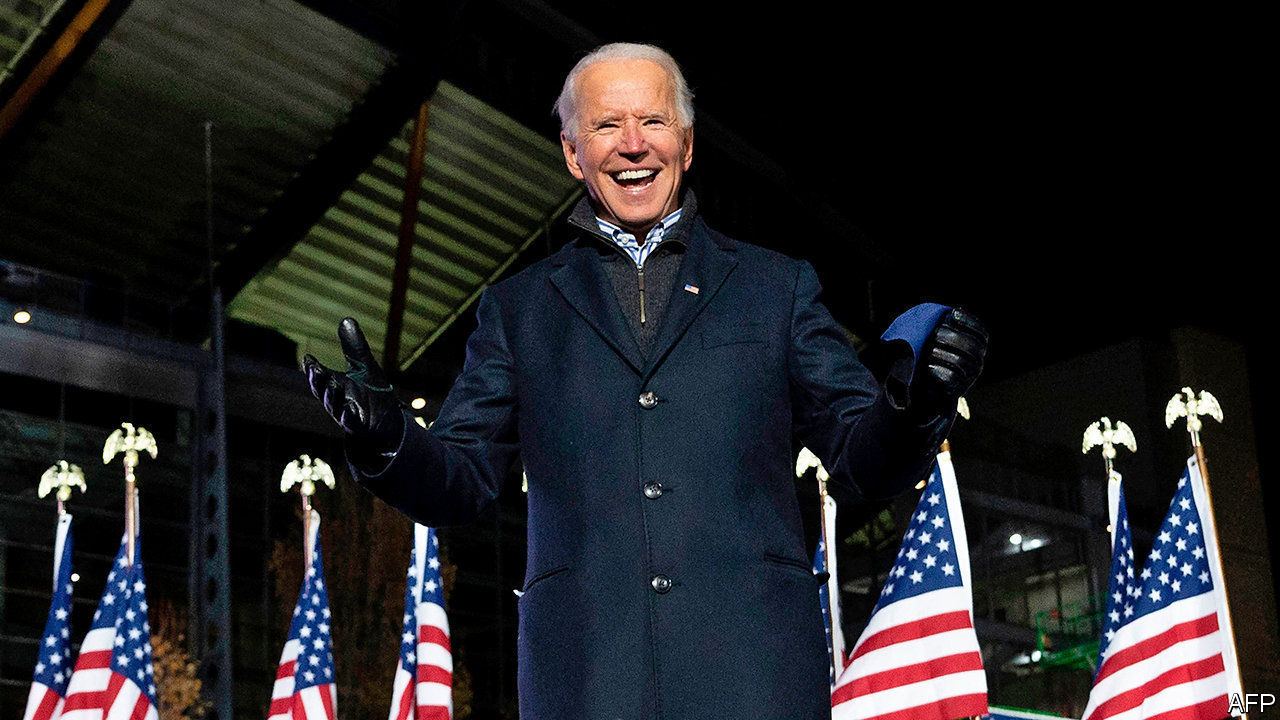 EITHER FOR fear of jinxing it or of appearing presumptuous, American presidential candidates avoid publicly naming their shadow cabinets ahead of elections. Instead, ambitious politicos must discreetly jostle one another in the long queues for the best upcoming posts. Now that Joe Biden has narrowly won the presidential election, though, these scrums will spill out in public as they always do. The cabinet nods will have extra significance this time, though. Mr Biden is less a movement leader (besides being anti-Trumpist) than he is a transitional one—an elder statesman who will mark the Democratic Party most by anointing the next generation of standard-bearers.

There are many contenders, of various species. There are the hangers-on accumulated over Mr Biden’s half-century in national politics starting with his election as a senator in Delaware in 1972. Many denizens of Obamaland and Clintonland (both Bill and Hillary) are waiting to come in from the cold. Then there are the vanquished primary candidates turned surrogates—like Kamala Harris, whose position as vice-president was fixed in advance. Mr Biden’s unusually broad coalition of establishment Democrats, socialists and excommunicated Republicans assembled during the presidential campaign also adds to the mouths to feed the spoils to. Many will have to go hungry.

Mr Biden’s own tribe—the establishment Democrats—are likely to do best. Ronald Klain, who worked in the previous two Democratic administrations and ran Barack Obama’s management of Ebola, is the front-runner to be chief of staff. It is, with apologies to Ms Harris, the second most important job in the White House. The favourite to be secretary of defence is Michèle Flournoy, a former undersecretary of defence under Mr Obama, an ex-think-tanker and a current business consultant. Competition is stiffer for the role of secretary of state. Should the new Senate accommodate her, Susan Rice, a former national security adviser to Mr Obama, is the rumoured first choice of the president-elect. Other big jobs could well stay in-house: expect Jared Bernstein, Mr Biden’s chief economist during his vice-presidential days, to reprise a leading economic advising post; and Tony Blinken, who got his first White House job in 1994, to be the next national security adviser.

Progressives, in contrast, may be stymied. Elizabeth Warren, a firebrand senator from Massachusetts with a brilliant mind for bureaucracy, seems to be angling for the post of treasury secretary. Mr Biden, however, is said to be considering an informal ban on appointing sitting senators to his cabinet because this would trigger special elections. Democrats will probably need to win two run-off elections in Georgia in January to secure a bare tie in the Senate (which Ms Harris would break). Even in their best-case scenario, there will not be a single seat to spare.

That reasoning is especially forceful in the case of Ms Warren, because her interim replacement would be named by the Republican governor of Massachusetts. The same logic would, perhaps conveniently, rule out Bernie Sanders, the socialist senator from Vermont, from a post as, say, secretary of labour. Instead the front-runner for treasury secretary is the not-exactly-Warrenesque Lael Brainard, an ex-McKinsey, ex-Clinton, ex-Brookings, ex-Obama economist who is currently a governor of the Federal Reserve. The top progressive prize might instead come in a lower-tier cabinet post, like secretary of health and human services, which may go to Pramila Jayapal, a champion of “Medicare for All” in the House of Representatives.

Other than Ms Harris, the Democratic-primary candidate who may fare best is…

Who might figure in Joe Biden’s cabinet? Six names tipped for top jobs

Who Are Contenders for Biden’s Cabinet?

‘Trump Has Been a Kind of…

How bad is Russia’s Covid crisis?…

Israeli Clinic for Fragile X, One of…