“I’ve never done anything so profound before,” she told Fox News.

Kelly Carlson stopped by Fox News to give an update on her life as a “military wife,” saying she now enjoys making “knives and sheaths” for law enforcement professionals.

During a Friday appearance on Tammy Bruce’s show, the former “Nip/Tuck” star went into detail on how she moved to San Diego with her survival specialist and Navy chief husband, Dan Stanchfield, after a successful career as a model and actress.

“I did leave Los Angeles in 2015 because my husband Dan — Tracker Dan — is based on Coronado and we needed to be closer and my business motto in life is: ‘Sounds great, let’s go do it!'”

Waiting for your permission to load the Instagram Media.

“And so I was really excited about being a military wife — completely different from anything in my life I’ve ever experienced and it’s been so grounding and just really fun and completely a different world than I’m used to,” she continued.

As for the chance at another Hollywood chapter, Kelly said, “It would have to be a really big deal to go back up there.” 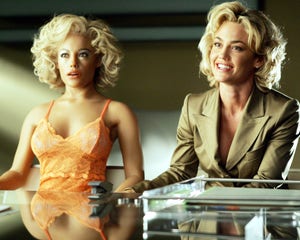 Kelly found fame playing blonde bombshell Kimber Henry on Ryan Murphy’s FX series that ran for six seasons from 2003 to 2010. Her last acting credit was back in 2013.

Now worlds apart from Tinseltown, Kelly explained to Tammy what makes her happy in her new role.

“We make knives. And I make the sheaths. And I’ve never made anything with my hands before,” she continued. “And when I can hand a knife and a sheath off to law enforcement or someone in the military — it’s really cool. I’ve never done anything quite that profound before. So I love it.”

Actors Who Got Different Roles Than They Auditioned For

“Dan can be in the spotlight and I can be behind carrying his bags. “

After correcting Tammy on Dan being a “chief” in the Navy and not an “officer,” Kelly said her husband has only a few years left in the service.

When asked how she would encourage people to find happiness over money and fame, Kelly replied that she can only relay her own experience in making such a move.

“I’m someone who follows what I want to do in my gut and nothing can stop me and so it’s an easy choice for me to leave a lot of money or fame — to go do something that my heart really wants to do,” she said. “And I think you have to be that kind of person because fame and money is really powerful and — don’t get me wrong I love it too — but it’s not everything for me and I’m fulfilling other things in my life that I never learned to do before.”

“I’m kind of a spirit that you can’t stop. So If I want to go be a military wife or go make knives,…

Kylie Jenner got a restraining order against a ‘stalker’ who allegedly…

SARAH VINE: Eat your heart out Harry and Meghan, the Cambridges’ home movie is

The U.S. warns citizens of…