British car brand MINI has unveiled its Vision Urbanaut concept vehicle, which adapts its interior space via a disc-shaped device that turns the dashboard into a daybed and the windscreen into a balcony.

The fully electric Vision Urbanaut concept has an expansive interior with moveable elements that help create three different configurations or “moments”. MINI has labelled these Chill, Wanderlust and Vibe.

These three designs, which offer both a more conventional car format fit for driving and a living-room-like space, are supported by the vehicle’s autonomous capabilities.

At the centre of the vehicle is a table with three indents on its surface. Users can switch between the three preconfigured interior layouts by placing a disc-shaped device, called the MINI Token, into one of these openings.

Above the table, a circular screen displays driver information and can also be bent downwards to act as a light.

Travellers enter the 4.46 metre-long vehicle through a large sliding door positioned on the side of the car – the only door on the whole vehicle.

The two front seats are designed to rotate, while the bench-like two-seater at the rear can be folded outwards to face a different direction.

When the car isn’t being driven, the dashboard can be lowered to create a daybed area behind the two front seats. The windscreen can also be opened upwards to create what MINI describes as a “street balcony”.

A textile-covered archway at the back of the vehicle called the Loop extends over the seat bench to create a “cosy corner”.

These features enable the car to switch between a conventional format for driving and a more homely space that MINI says is “more of a living room than a vehicle”.

The Chill configuration sees the rear seat bench folded down to offer an expansive sofa-like area, while LEDs embedded in the Loop archway above light up to reveal a leafy pattern designed to emulate a forest canopy.

The circular screen above the central table folds down to become a lamp, getting rid of any digital displays or obvious car-like visual elements.

The Vibe design aims to offer a more interactive environment. The windscreen can be opened up to “blur the boundaries between the outside and inside”, while the central, circular screen becomes a media control centre.

In this design the Loop surface projects images of graphic equalisers that move in time with the music. These visuals are also shown on the car’s exterior on the front, rear and wheels, creating a club-like atmosphere.

Alternatively, the Wanderlust option is designed for when the Vision Urbanaut is in motion, either manually or autonomously.

When this “moment” is activated, the central screen displays visuals informed by 1950s and 60s tourism posters, as well as an animation of the route ahead or other travel information, like nearby attractions or estimated arrival time.

Meanwhile, in driverless mode, the Loop mimics the car movement by displaying a simulated blur of passing scenery. 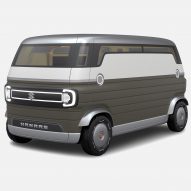 Travellers can switch to manual driving mode by tapping on the MINI logo on the dashboard, which brings out the steering wheel and pedals.

The MINI Token can also be programmed to offer customised interior arrangements set by the user, including fragrance, lighting and music.

The car’s exterior body, which resembles the shape…

GM offers $500,000 to Cadillac dealers who want to opt out of the EV revolution

Japan’s first-ever hotel in a…

Families of 6 Americans convicted in…

CBD is not a narcotic, says EU court as…